WE ARE GOING TO BREMEN TO BE MUSICIANS 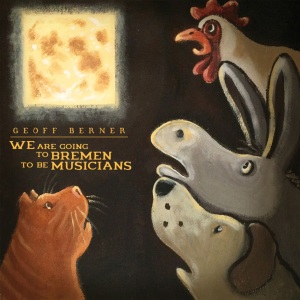 A limited number of Geoff Berner’s new album CD’s are being shipped from Oriente Records, Berlin just for Geoff’s album-release show on Sept 12th. The album isn’t available in stores or online yet, so come and get one of the first copies and hear it played live at the Wise Hall.

“We Are Going To Bremen To Be Musicians” is a reference to the old German folk tale about elderly farm animals threatened with death, who run away from their masters in the hope of achieving freedom and becoming Town Musicians. It’s an absurd tale of irrational hope and optimism in the face of horror, and that’s where the story connects with the songs on the album. “I would describe the record as a compendium of strategies against despair,” says Berner.

Some of the strategies offered include: Love, as in the song “I Don’t Feel So Mad At God When I See You In Your Summer Dress”; Redemption, as described in “Swing A Chicken 3 Times Over Your Head”, and pure Shadenfreude, as depicted in “Dance And Celebrate (The Misfortunes of People We Hate)”.

Online tickets are already selling briskly. If you plan on buying tickets at the door (8pm) you should come early because this show will sell out.

This entry was posted on August 26, 2015 by accordionnoirfest. It was filed under Misc and was tagged with accordion noir, Geoff Berner, vancouver, Wise Hall.